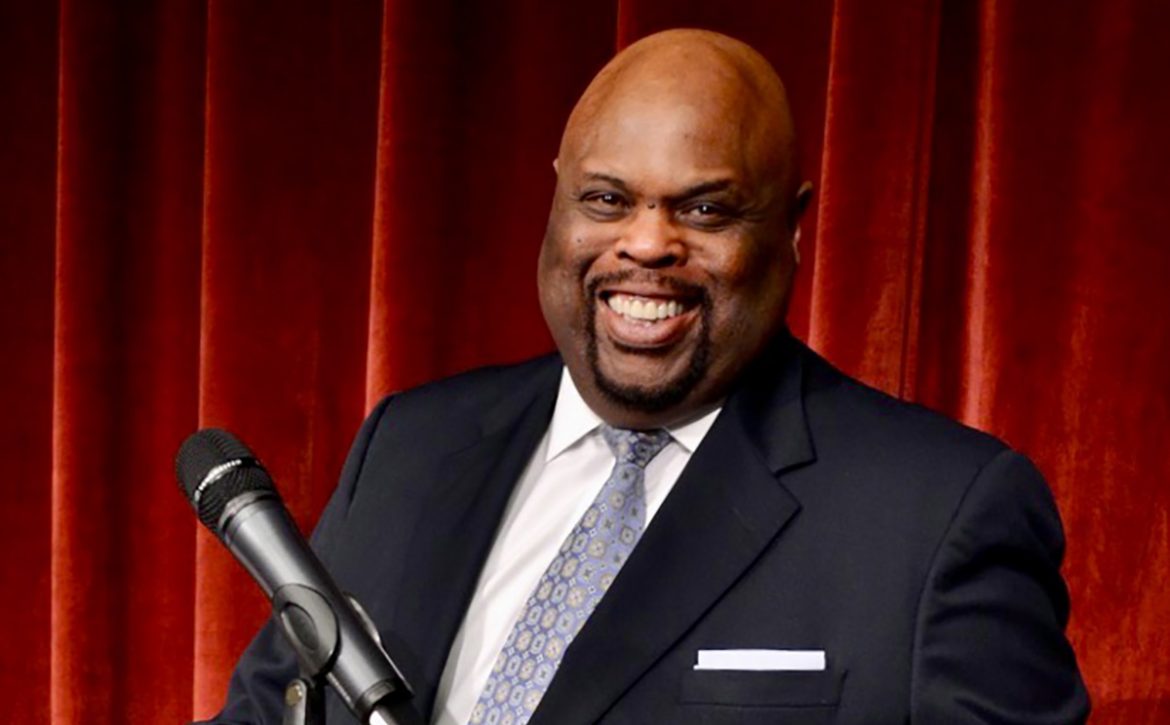 Rick Rigsby, who lived in Bryan-College Station from 1992 to 2007 and worked in a variety of positions at Texas A&M, evoked laughter and tears from about 200 area business leaders inside the Century Ballroom at the Doug Pitcock ’49 Texas A&M Hotel and Conference Center.

“I love the fact that we have forward [economic] momentum, the likes of which I’ve not seen, and I came to College Station in 1992. Allow me just a few minutes to be your cheerleader,” said Rigsby at the outset of his hour-long speech, which weaved praise for the Brazos Valley’s economic and population growth with advice on ways for business owners and executives to be more successful.

Rigsby, a former character coach and chaplain for the Texas A&M football team, went viral in 2017 after a commencement speech he gave at California State University Maritime Academy — “Wisdom From A Third-Grade Dropout,” in which he discusses key lessons gained from his father — was posted online.

“I just feel good being in Aggieland,” Rigsby said. “My goal for being here is to really encourage business owners, entrepreneurs, those who are starting businesses to grow the kind of infrastructure all throughout this community that will attract new businesses — businesses from literally all over the world right here to the Brazos Valley,” he said after his address.

“In order to achieve those lofty goals, business owners every day have to ask themselves a simple question: How great do I want to be today? I believe that is the genesis toward making an impact, toward leaving a legacy in the Brazos Valley worth following,” he said.

“This place has tremendous potential,” Rigsby said. “The goal is not to be spoiled by the success we’ve had so far. Nothing fails like success.”

Through personal anecdotes and sharing quotes by a variety of figures from Aristotle to late Pittsburgh Steelers coach Chuck Noll, Rigsby encouraged attendees to focus on “the basics” — on doing ordinary things exceptionally well, he said. He repeatedly returned to wisdom he learned from his father, who was born in 1920 and had little formal education but nevertheless had a lifelong love of learning.

During his remarks, Rigsby bantered with former A&M football player and current Bryan-College Station businessman Hunter Goodwin. Rigsby was on the A&M football team’s staff during Goodwin’s career. In Goodwin’s introductory remarks, he reflected on 1996, which he said for himself was a special year as he got drafted by the Minnesota Vikings of the NFL, but was a “year of great pain” for Rigsby. Both men said that year cemented their friendship.

Rigsby elaborated near the end of his remarks on the hardship of journeying alongside his wife that year as she battled — and eventually died from — breast cancer. “This community gave me a place to grieve and a safe place to heal,” he said of B-CS. Several attendees wiped away tears as he spoke of her last words to him, which he said gave him the strength to continue on after her death.

Rigsby is now based in Dallas and travels throughout the world to speak to a variety of audiences.

Among the initial report’s findings, the report stated that the local unemployment rate as of July 2018 was 2.9 percent, compared to a Texas rate of 4 percent and a national figure of 3.9 percent. The report considers Brazos, Burleson and Robertson counties to make up the Metro Statistical Area, and uses monthly sales taxes as one of its primary indicators of economic growth and vitality.

The College Station-Bryan Business-Cycle Index is patterned after the indexes created by the Federal Reserve Bank of Dallas for the major Texas metro areas, according to a BVEDC release.

BVEDC President/CEO Matt Prochaska said, “The Brazos Valley Economic Development Corporation is focused on helping businesses launch, grow and locate in the Brazos Valley, including helping entrepreneurs who are at any one of those three business stages.”

Prochaska said the BVEDC is pleased to team with PERC, and called the research center “one of those outstanding partners in mutually equipping businesses in our community to reach their maximum potential.”

“It was a great event with over 250 people. The area is growing, the economy is growing, and the Economic Development Corporation’s focus is to coordinate with the two cities and the county to bring in businesses, high-paying jobs and partnerships with Texas A&M University,” he said.

REF: The Eagle. By Kenny Wiley