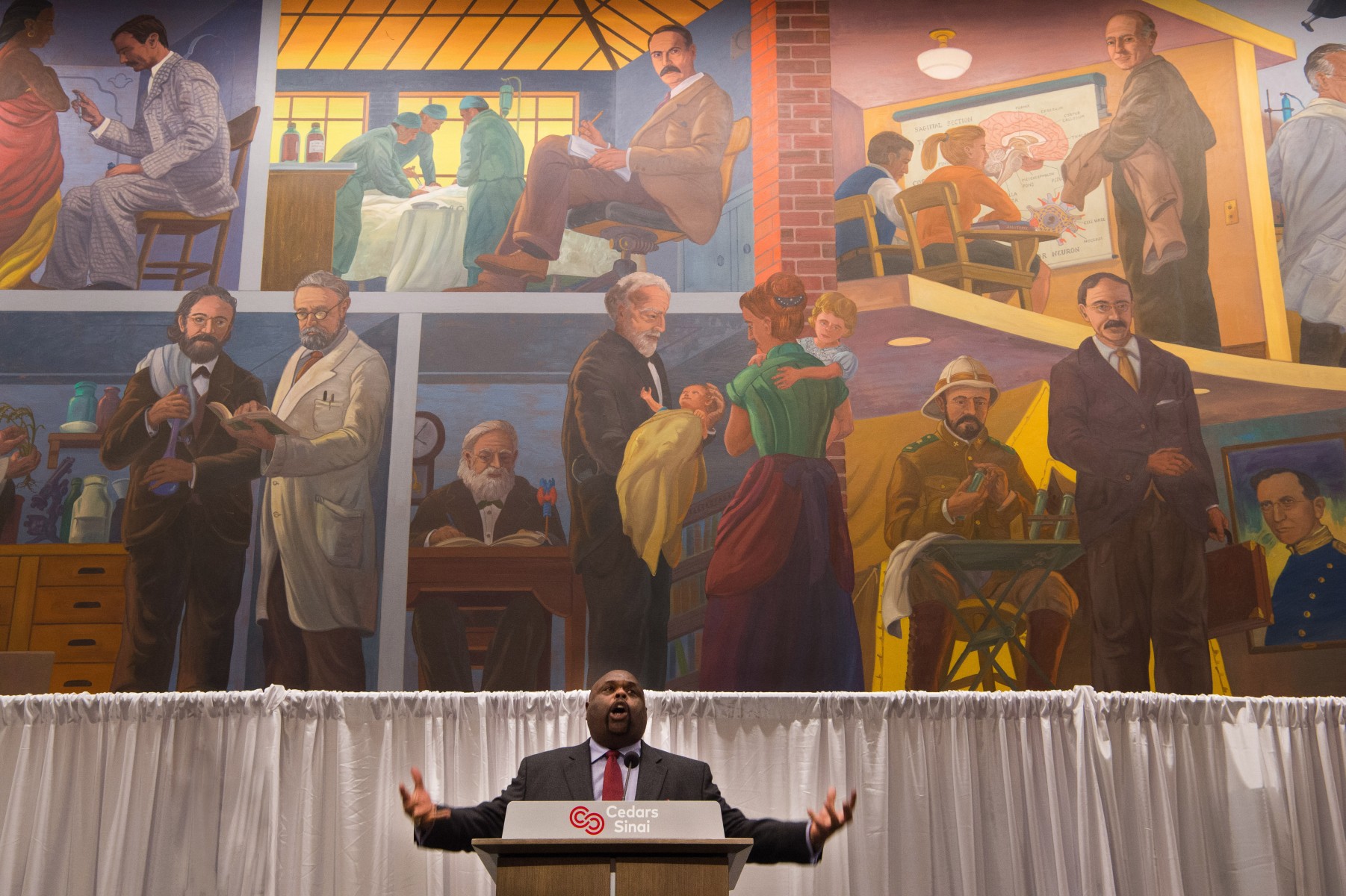 How can we best honor the legacy of the civil rights icon Dr. Martin Luther King Jr.?

“By making sure you hope against all hope. By exhausting the gifts that God has given each and every one of us, so that you die empty. And above all else, by standing — even when you feel like freaking out, and flipping out and going out of control — you will stand!”

In the span of less than 35 minutes, Rigsby traced African-American history from its beginnings in slavery to the experiences of civil rights legends who preceded, or who worked alongside, King. Those figures included unionist A. Philip Randolph, the founder of the Brotherhood of Sleeping Car Porters, as well as Fred Shuttleworth, who teamed with King and others to establish the Southern Christian Leadership Conference while fighting to end racial segregation in the South.

Rigsby also highlighted the origins of King’s early days as a civil rights leader, citing his work as a young preacher in Montgomery, Ala., and referencing the dramatic text of King’s “Letter From a Birmingham Jail.”

At other points, Rigsby even channeled King, such as when he drew on the civil rights leader’s “If you can’t fly, then run” words, as well as a famous passage from the “I Have a Dream” speech delivered at the March on Washington in 1963.

“Don’t quit. Stand! You’re going to encounter somebody at this amazing facility that might just need to hear you say, ‘stand!’ How would you say it, Martin? ‘If you can’t fly, then run. You can’t run, then walk. If you can’t walk, crawl. But whatever you do, keep moving, even if you have to stand.’”

“In other words, friends, do something. Do something today,” Rigsby continued. “Even if it’s just a dream.”

And then, again very closely – although not always exactly — drawing on King’s own words, Rigsby added: “I have a dream, deeply rooted in the American dream that one day this nation [will] rise up to live out the true meaning of its creed. We hold these truths to be self-evident, that all men are created equal. I have a dream, down in Georgia, the sons of former slaves, and the sons of former slave owners, would someday, get together at the table of brotherhood…I have a dream, today, that one day little white boys and white girls will join hands with little black boys and black girls be brothers and sisters in love.”

Rigsby also interwove his discourse about King with the story of his own family – noting that the inspiration of King helped his family endure through the early death of his first wife to cancer, and also enriched the wisdom of his father, whom he described as “a third-grade dropout, the wisest man I ever met.”

The emotional impact of the words from Rigsby – a motivational speaker and former college professor and journalist now based in Texas – repeatedly evoked reactions ranging from laughter to rousing applause.

Singer Dorian Holley, who closed out the one-hour event, drew a fresh burst of laughter when he began by saying “Well, this isn’t fair at all,” — a reference to how hard it was to follow a performance like Rigsby’s.

But then the audience soon sprung back to its feet and swayed to Holley’s music. Backed up by musicians on guitar and keyboard, he closed the one-hour event with the songs “Abraham, Martin and John;” “Lift Every Voice and Sing;” and “Change is Gonna Come.”

As the program concluded, many in the audience collapsed into each other’s arms.

Employee Shay Domingo said, “The speaker gave me chills. I looked around, and a lot of other people were very emotional and were crying too.” Learning more about King, Domingo said, was “just so moving.”